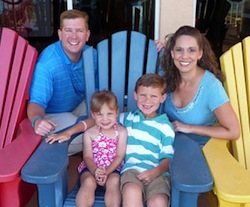 Dr. Harry W. Landsaw is a native of Norman, Oklahoma and northwest Arkansas.

While attending Southern College of Optometry, Dr. Harry received the Outstanding Clinician Award and was on the Dean’s List.

During his last year in optometry school, he completed an externship with an ophthalmology group practice in Germantown, TN. He received extensive training on the latest ocular surgeries and treatments of eye diseases.

He completed a second externship in Bartlett, TN, where he expanded his knowledge in primary care optometry in an independent optometrist’s office.

After graduating from optometry school, Dr. Harry worked with a large group of optometrists in the Dallas/Ft. Worth area where he received the New Associate of the Year Award.

You can schedule your next eye exam with us online!

Let's continue the conversation over on your social network of choice.